So I try to take books for baby (JF) whenever I am traveling or go somewhere new. And it is such a joy to see him getting the grown ups around him to read these books with him. Reading is not just an activity for parents and their children. Reading can be an activity that family and friends can participate in with your children. This year, JF read with mummy and Daddy of course. He read with grandmama and grandpa and with his cousins. 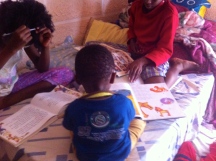 And thanks to everyone who bought him books as gifts, aunties and grand aunty, and friends.

You can write a book about anything. And often times two or three or four or more people end up writing about the same subject. I’ve been through some children’s books this week on the same subject. But each author tackles it in their own unique way. That’s why it’s important to have your own voice as a writer and stay true to it. Everyone has a story to tell and only you can tell yours in your own voice.

This week I read two books about penguins that wanted to fly.

I enjoyed both of them immensely. If I had to choose my favorite out of the two then it would be “Up and Down” by Oliver Jeffers. Which means that I am going to be looking out for more of his books. It’s just the way he writes, I guess. I read somewhere that the best children’s books have more than one layer of meaning to them. And it’s true. Both of these books have more than one layer and that is what makes them great.

You know what I like about Oliver Jeffers illustration? The fact that the illustration adds another dimension to the story. The pictures enhance the story not just interpret the story. The illustration is used to tell you more about what is going on, instead of just being there to put pictures to words. Ultimately both books are about friendship. In “Up and Down”, when the penguin’s desire to fly could be leading him into trouble and he’s not sure how he’s going to get out of it,  his friend, the boy, rushes in to save him.

In the book, “Penguins Can’t Fly”, it is the penguin that does the rescuing. He rescues his friend, the gull. I liked “Penguins Can’t Fly” because it teaches the reader to be true to themselves. It says you don’t have to be like everyone else. Your talent is your talent and it is just as good as the other person. It may not seem spectacular to you but if you use it well, it could do a lot for others. I liked that lesson. I like children’s books which teach a good lesson.

Now let’s talk about the other two books about the same topic, well sort of.

“The Yes” by Sarah Bee and Illustrated by Satoshi Kitamura
and
“Yes” by Jez Alborough.

“The Yes”, was an interesting read. I liked it even though it was something new to me. It was new,  because the story was not direct but was kinda like a metaphor. The main character was a Yes and every time it tried to achieve something the Nos would try to stand in its way. It’s the kind of story you read again and again to get all the metaphors out of it. I liked it anyway.

I guess some of these children’s books are sometimes written for the adults who are reading them to their children.

“Yes” by Jez Alborough is about a little monkey that doesn’t want to go to sleep. Best to read it to baby at bed time, so that he gets the message. If you get my drift.

Another thought about “Up and Down”, I wondered why the characters were just simply called the penguin and the boy. Wouldn’t proper names have made them more personal?

Sent from my iPad

If your baby is younger than 12 months you may feel that he or she is too young to enjoy books. However, if you start introducing books to them at an early age, hopefully they will grow to appreciate books. You may think that tablets and phones have taken over the lives of the young people and that your kids would not appreciate actual books with pages. But this is not so. There are so many young and old people who still enjoy reading books with real pages and babies can enjoy books too. The goal is to introduce books to your baby, so that they grow to appreciate the books and desire to read them too.

You can start with books that are easy for you to read to him or her and are colorfully illustrated. There are some baby books that come with photographs.

What types of books should you be looking at?

Board Books are nice because they are usually not too long and baby cannot rip out the pages easily.

Cloth books are also great as well. Again baby cannot tear the book or damage them with saliva if baby chooses to put the book in the mouth.

Bath time books. These are usually made with some sort of waterproof material. And they can go in the bath with baby. So you can read to baby in the bathtub.

Here are some tips for getting baby to enjoy books

Leave some of the books with the toys. So that baby can have the option of picking a toy or picking a book. I do tnoy designate a set time everyday for reading. I just let it develop organically. Every time baby picks a book, we go through it together.

You musn’t read the book word for word. You can simply show baby the pictures and point out things.

Baby touch books and other interactive books are great because they can keep baby entertained longer.

If baby seems bored then move on to something else. 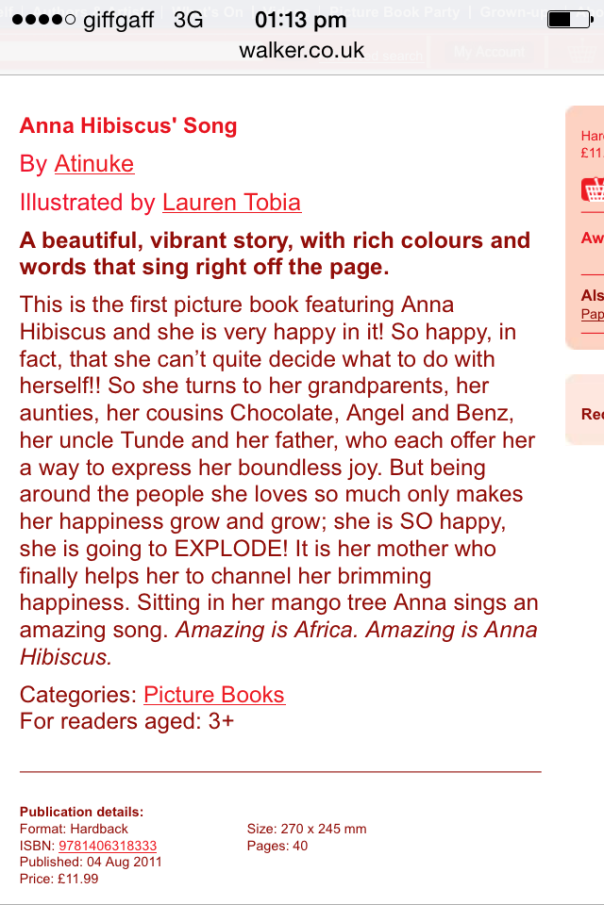 Anna Hibiscus’ Song is the first book in the Anna Hibiscus series, I wil definitely be looking out for more of these books because I enjoyed this one a lot. The story is about Anna Hibiscus who sits up on a tree watching her family and becomes so happy that she doesn’t know what to do unti finally she starts to sing. My joy grew as I read the book, just as Anna’s joy grew. It’s a very feel good book.

One thing I found interesting about the book was the fact that Anna’s mother looks aibino. No, I don’t think she is just a fair skinned Nigerian, because her mother’s hair is blonde. So I think that was cool, because it is nice to read a book and see such a unique demographic represented.

Now, I found it interesting that there was only one Yoruba name in the book -Uncle Tunde. I did not quite understand the choices of names sha. Her cousins’ names included Chocolate, Angel and Benz.  It  may not bother anybody else, but I really did wonder about the name choices.

All in all I really liked the book and will be looking out for more in the Anna Hibiscus series and more books by Atinuke.

There’s not only one way to illustrate children’s books. There are so many different ways. 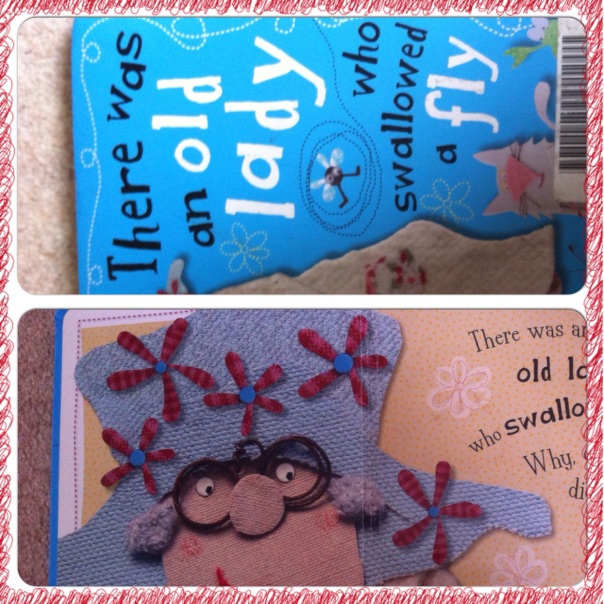 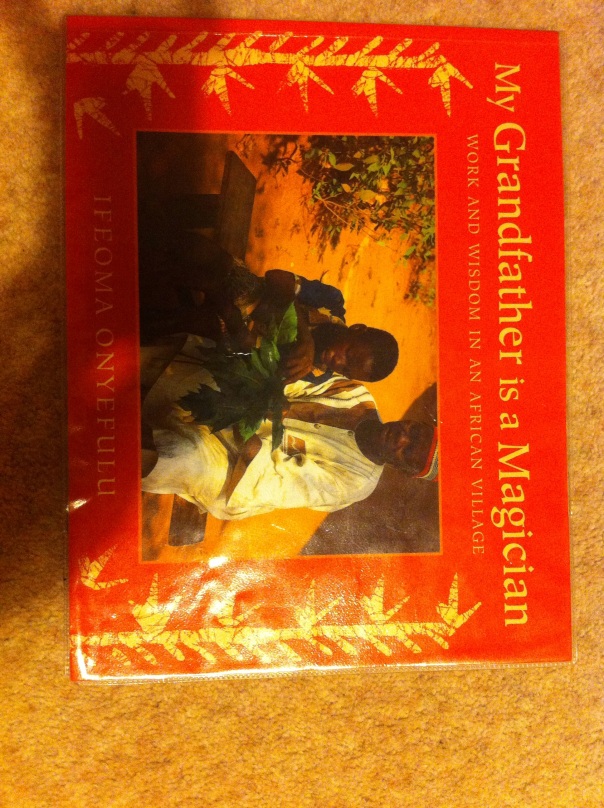 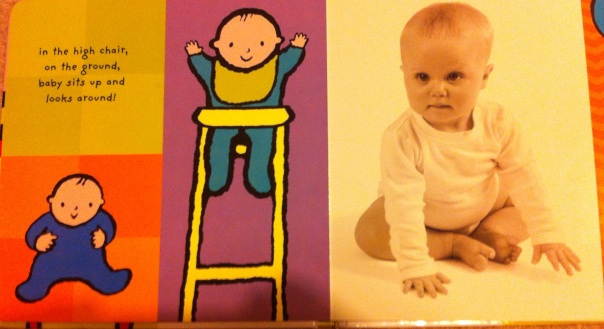 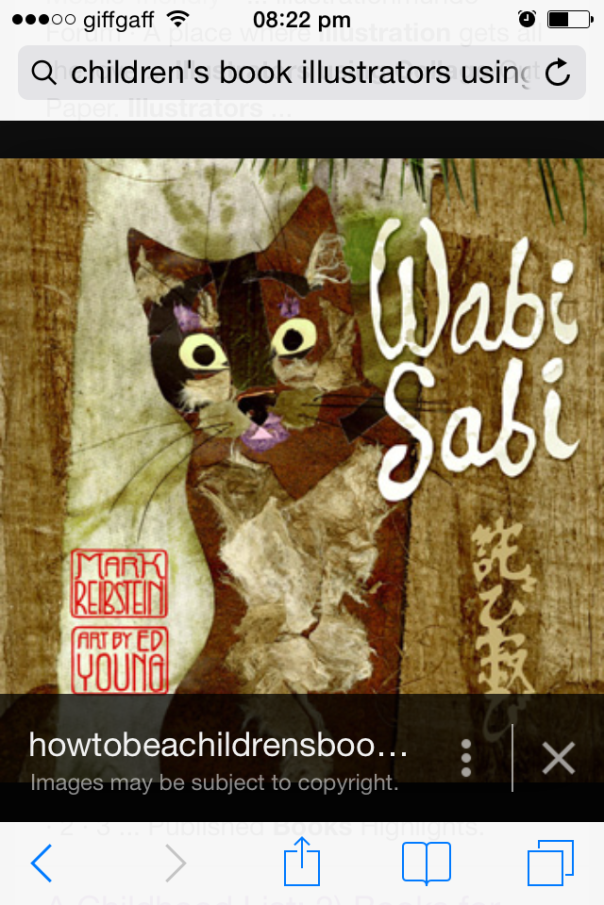 Story and Illustrations by Polly Alakija 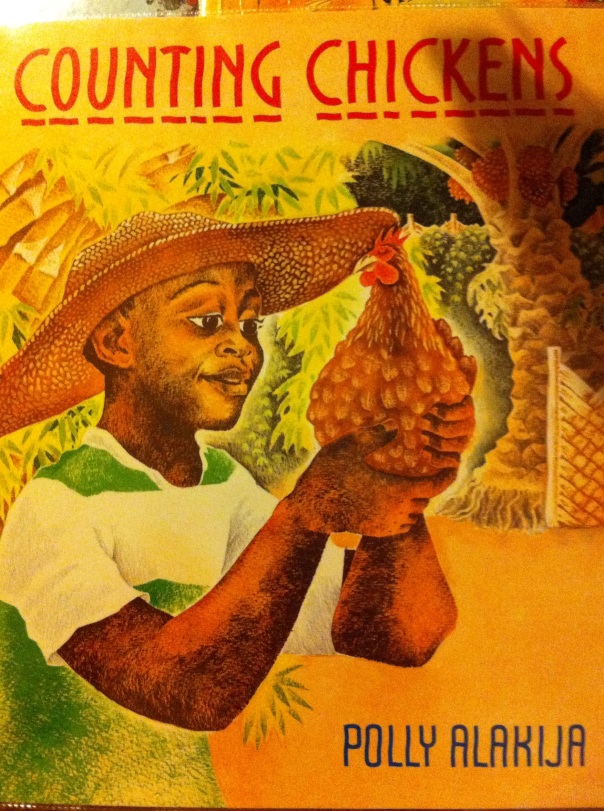 This book is based in Nigeria. This is one of the few books that baby picked up and paid attention to me as I read it from page to page. The story was interesting to read and  also succeeded in teaching the reader how to count from 1 to 7; days of the  week; and about animals and their babies. The author was able to show all this in the simple story.

The illustration was great as well. The details in each of the pictures really captures life in a Yoruba town. I was particularly amused by the boy with the cell phone.

I love children’s books featuring little black children and they are even more. Special when the children and girls. So I picked out this book from the library because the protagonist is a black female. The book was an interesting read. And it is part of a series of books about Lulu.

In this book, Lulu reads a book of garden poems and decides that she wants to plant a flower garden, so she does with the help of her mother. It’s a simple enough book to read and the story is very clear. It’s nice enough.

Now what really stood out to me was Lulu’s fashion sense. She is a very well dressed little girl!

I lure her style!

Story and Pictures by Niki Daly

Jamela is such an impulsive little girl and I like her! Her impulsiveness gets her into all kinds on interesting situations that are fun to read about. In this book Jamela’s mother buys a fabric for a wedding. She washes it and hangs it up to dey but before we know what’s happening Jamela is prancing down the street with the fabric draped around her. She ruins the fabric of course but something interesting happens to turn the situation around.

Jamela is a wonderful character and I look forward to reading more about her.